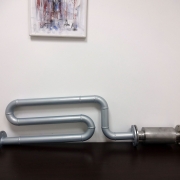 MTS-01 are the only devices, in which in the passing fuel oil flow are generated hydrodynamically high and low frequency mechanical Oscillates and simultaneously is caused a cavitation zone and ultrasound. The device is protected by following patents: EP 0 633 865 B1, US 005529 688 A and DE 693 04 319 T2.
The low frequency Oscillates are generated by a specially designed cascade construction located
in the fuel oil outlet. The high frequency ultrasonic Oscillates are located in a vortex camera situated right after the cascade construction. The above mentioned camera is especially constructed so as to generate not only ultrasonic but cavitation waves as well. Simultaneously the fuel oil passes through a serpentine with a special structure which additionally through physic-mechanical means decreases the fuel oil outer pressure. 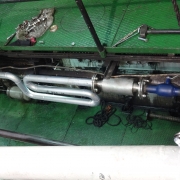 As a result of all these effects, rapid and irreversible processes of destruction of clusters take place on the one hand and on the other hand, in the fuel oil molecules is induced an energetic potential which is later rejected during the combustion in the motor. The device does not add anything to the fuel oil or change its chemical composition – there are no moving parts. It works entirely on the physicomechanical basis which substantially decreases the fuel oil viscosity in consequence of which it is dispersed into finer drops due to the destructured cluster chains. This causes a finer air-drop fuel mixture, full fuel combustion, increased efficiency coefficient of the oil fired a steam generators and engines and decreased levels of CO in gas discharged by up to 50%, which proves the more complete combustion and better ecological effect. The device is also efficient for handling both cold and heated fuels thus leading to fuel economy. 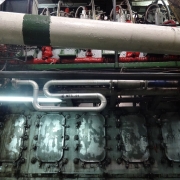 The device prototype has been tested in a laboratory of the Royal Swedish Academy of Sciences during real operation of oil fired hot-water boilers. The result has been a decrease by 4 % to 6% of the fuel consumption and between 10% and 30% of nitrogen oxide, soot and СО depending on the boiler operation mode. The testing of the effects on diesel engines of heavy construction machines and transport equipment shows even better results: 8% – 15% fuel economy and reduction of nitric oxide, soot and СО of between 30% and 50% depending on the engine operation mode. The practical results prove the device efficiency and explain the different coefficients of any particular combustion types – the effect for internal combustion engines is significant, due to the precise combustion process. This is another attest for the impact of the physical and mechanical fuel characteristics on combustion process completeness and efficiency, especially on those of internal combustion engines. This is very important for the operation of ship engines and other units (steam generators).
MTS – 01 are the only devices designed for Heavy Fuel Oil handling. When passing through the MTS – 01 device, the viscosity of the Heavy Fuel Oil significantly decreases. The device is tested under real working conditions on a ship. As a result of the viscosity decrease, the temperature of heating up the Fuel Oil was reduced from 130 ? С to 90 ? С. This makes the device effective for operating of the ship boilers ( steam generator ) especially under extreme working conditions.MTS – 01 device would be particularly efficient on tankers.
There are three main economic and environmental benefits of this equipment:

1. Heavy Fuel economy by 5-15% depending on the steam generator operation mode;
2. Decreasing the number of routine engine overhole of the machines, which nowadays operate on a critically low revolutions.
3. Environmental effect due to the decrease of the emissions of nitric oxides, soot and СО by between 30% and 50%.

This site uses cookies. By continuing to browse the site, you are agreeing to our use of cookies.

We may request cookies to be set on your device. We use cookies to let us know when you visit our websites, how you interact with us, to enrich your user experience, and to customize your relationship with our website.

Click on the different category headings to find out more. You can also change some of your preferences. Note that blocking some types of cookies may impact your experience on our websites and the services we are able to offer.

These cookies are strictly necessary to provide you with services available through our website and to use some of its features.

Because these cookies are strictly necessary to deliver the website, refuseing them will have impact how our site functions. You always can block or delete cookies by changing your browser settings and force blocking all cookies on this website. But this will always prompt you to accept/refuse cookies when revisiting our site.

We fully respect if you want to refuse cookies but to avoid asking you again and again kindly allow us to store a cookie for that. You are free to opt out any time or opt in for other cookies to get a better experience. If you refuse cookies we will remove all set cookies in our domain.

We provide you with a list of stored cookies on your computer in our domain so you can check what we stored. Due to security reasons we are not able to show or modify cookies from other domains. You can check these in your browser security settings.

We also use different external services like Google Webfonts, Google Maps, and external Video providers. Since these providers may collect personal data like your IP address we allow you to block them here. Please be aware that this might heavily reduce the functionality and appearance of our site. Changes will take effect once you reload the page.